Especially sunny and warm autumn weather welcomed His Holiness Vishwaguruji and his disciples in Strilky, Czech Republic, for the Yoga in Daily Life weekend seminar. 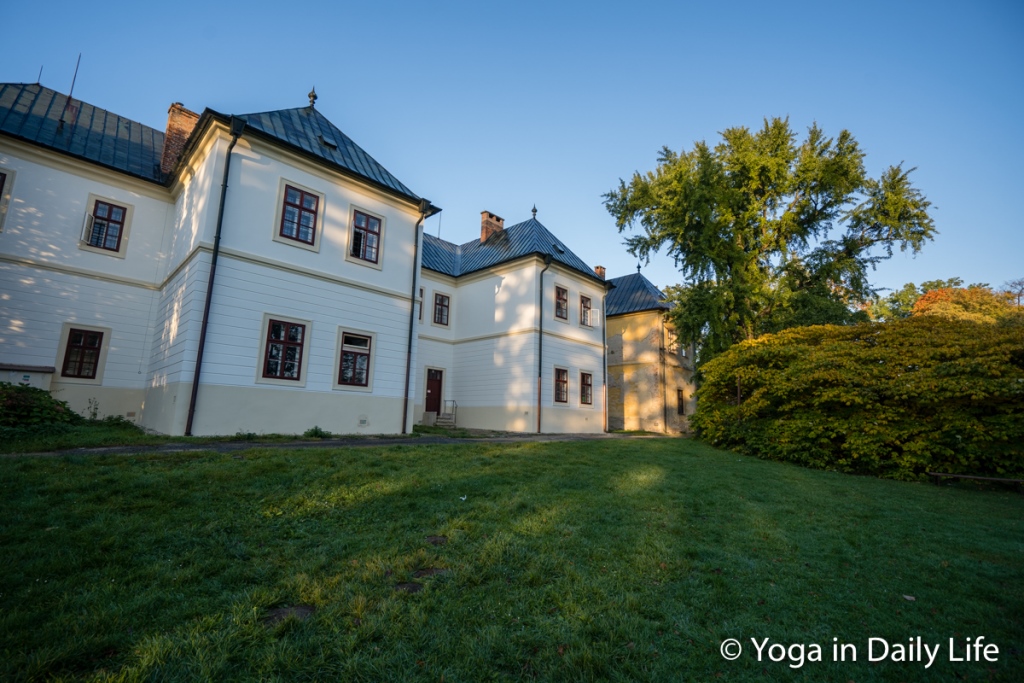 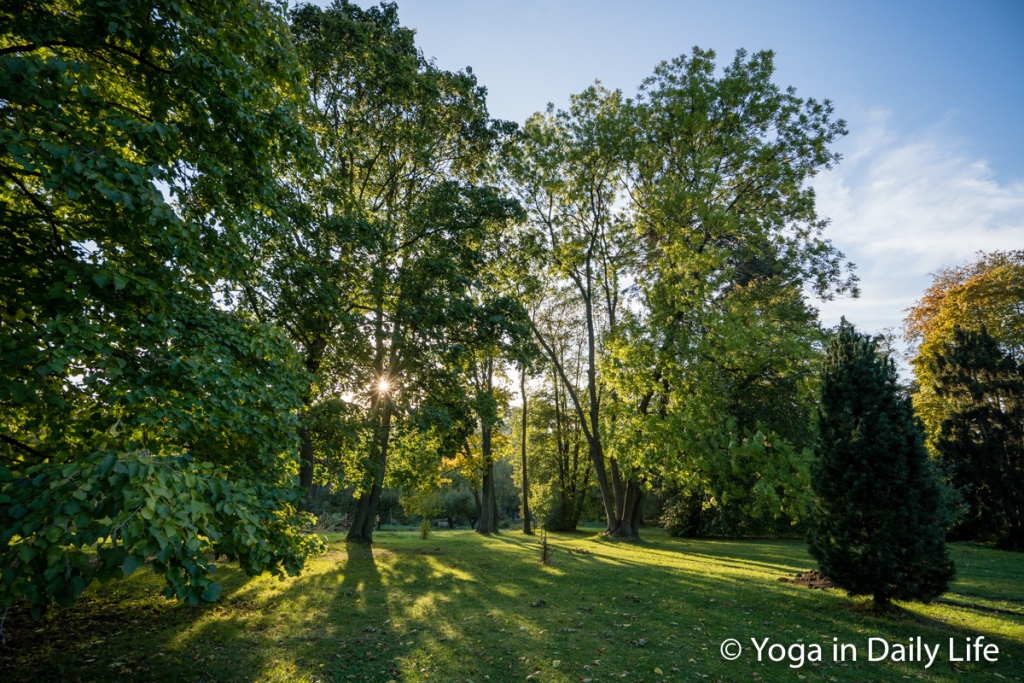 A newly planted pine tree was waiting for yoga practitioners in the arboretum of Strilky Ashram, replacing the old holy tree, which naturally finished its life circle earlier this year.

The old tree, especially dear to all, witnessed many blissful moments with Holi Guruji, hundreds of satsangs with Vishwaguruji, spiritual sadhana and good thoughts and wishes from people who were around him.

The new tree, which is the same type of pine (Austrian stone pine or pinus cembra), is 25 years old – the same number of years that the property has been known as Mahaprabhudip Ashram and is already 4m high. It will continue to be there for all for many years to come, as is the dharma (duty) of a tree.

It was also a special occasion with the Sharad Purnima full moon occuring on the Sunday and Vishwaguruji speaking many times of the moon and its physical and spiritual effects at his satsangs during the weekend. 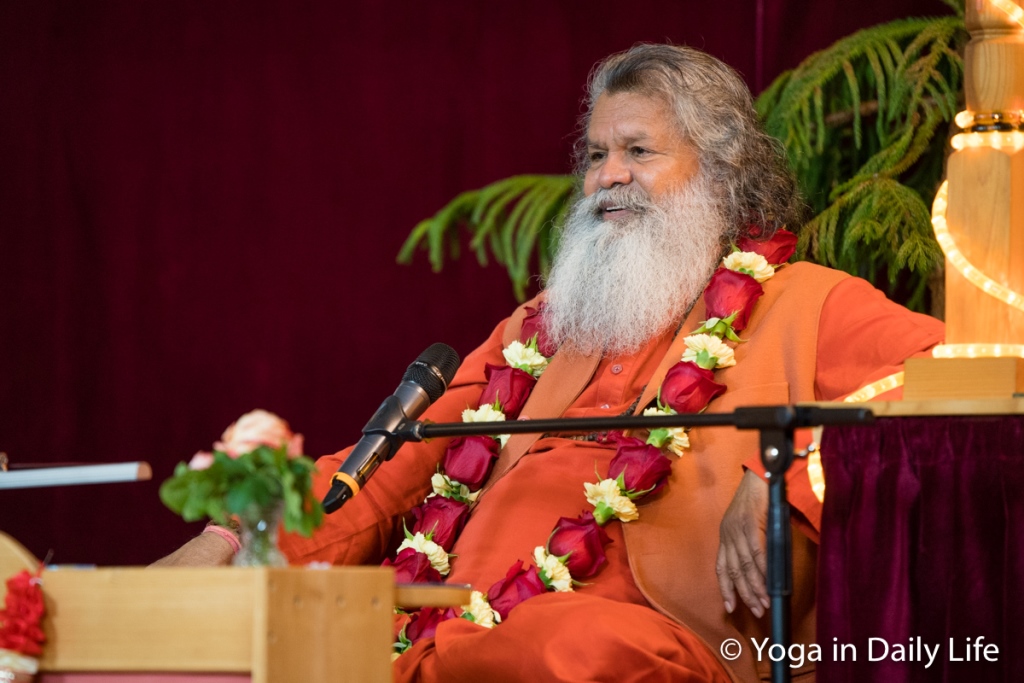 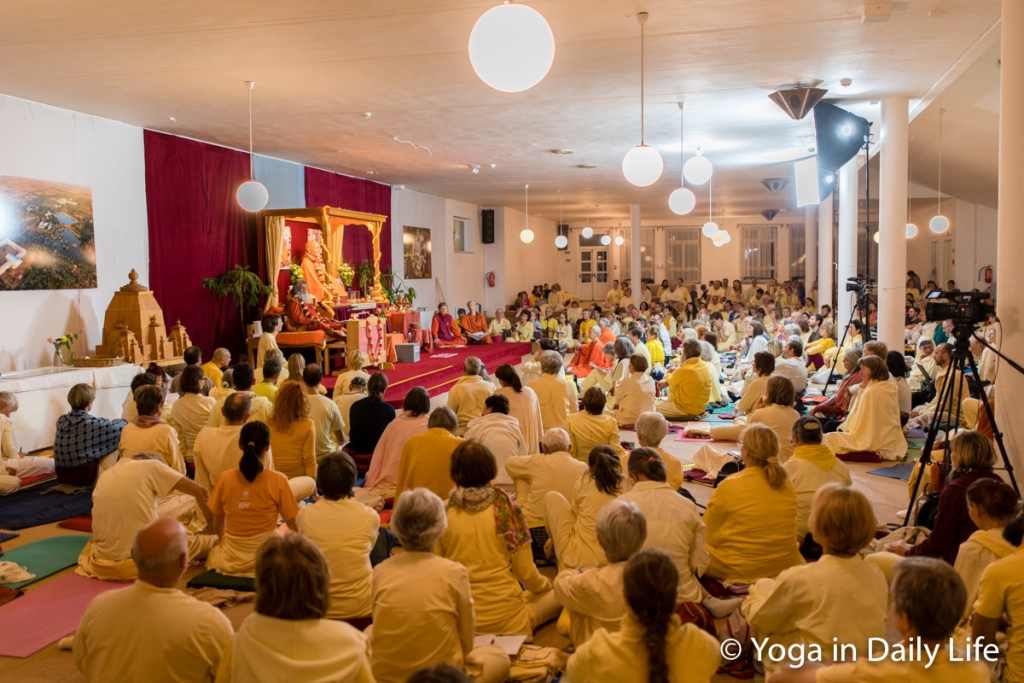 The full moon and the dark/new moon both have very strong effects. The influence of the moon can be felt few days before and after the exact peak time. For people who are practicing spirituality, is good to make a resolution or sankalpa, that, for example, on each full moon they will fast and pray.

“When you look at the moon, think about purity and it will help to remove many diseases,” His Holiness Vishwaguruji said. “Have a sankalpa, a wish, that can be for desiring a connection to the Divine Mother, the divine Shakti. Shakti, the universal power, can unblock the negative impacts. Shakti has the quality of the Divine Mother and fasting on special days such as Navratri brings us closer to her.”

Sharad Purnima is traditionally known in India as the day when the season changes into the cold, winter period.

Vishwaguruji clarified the terms uttan and patan, (mentioned in the teachings of the Bhagavad Gita), with a short story:

A group of friends decided to go to the cinema, but one of them went to their regular satsang, spiritual meeting, with their guru instead. On his way home, the visitor to the satsang hurt his foot badly and the other friend travelling home from the cinema found a small sack of gold coins. Since they didn’t understand the situation, they asked their guru. The master said that the one with the gold had in his destiny to be a rich king, but avoiding satsang had reduced his luck only to some coins. The other one had in his destiny a fatal accident, but his bad luck was reduced by the satsang to only having a foot injury. Good habits lift us 'up' in life (uttan) and bad ones lead us 'down' (patan).