An auspicious day of celebrations in Strilky Ashram, Czech Republic

On Thursday 15 August 2019, several simultaneous events took place, making for a very auspicious day of celebrations during the first week of the annual Summer Retreat with Vishwaguruji at Mahaprabhudip Ashram in Strilky, Czech Republic.

Firstly, Thursday is known as Guruvar in the yogic tradition – the day of the Guru – so it was already a day to commemorate the special relation between guru and bhakta (disciple); and, as there was also a full moon (purnima), on this day, it is also celebrated as Gurupurnima.

This particular full moon day, at the end of the Hindu month of Shraavana (July/August), marks the Rakshabandhan festival, a day to reconfirm the close relations between sisters and brothers, both within families, as well as between friends on the spiritual path. 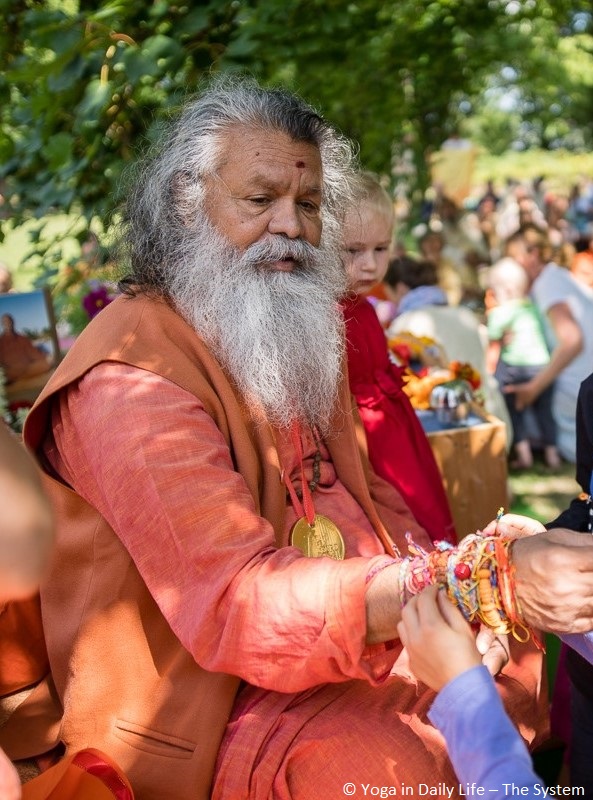 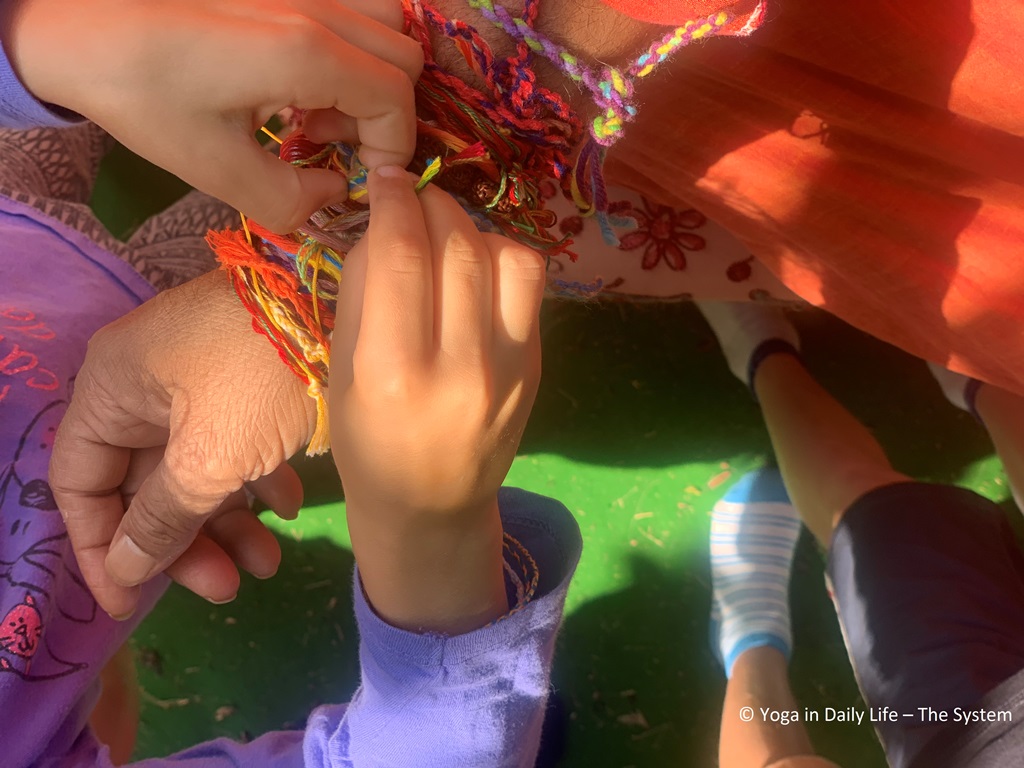 And 15 August is Indian Independence Day, commemorating the great day independence was achieved in 1947.

But most importantly, this was the birthday of His Holiness Vishwaguru Mahamandaleshwar Paramhans Sri Swami Maheshwarananda Puriji, according to the western calendar, and an opportunity for bhaktas to express their love, thanks, devotion and good wishes to him in person. 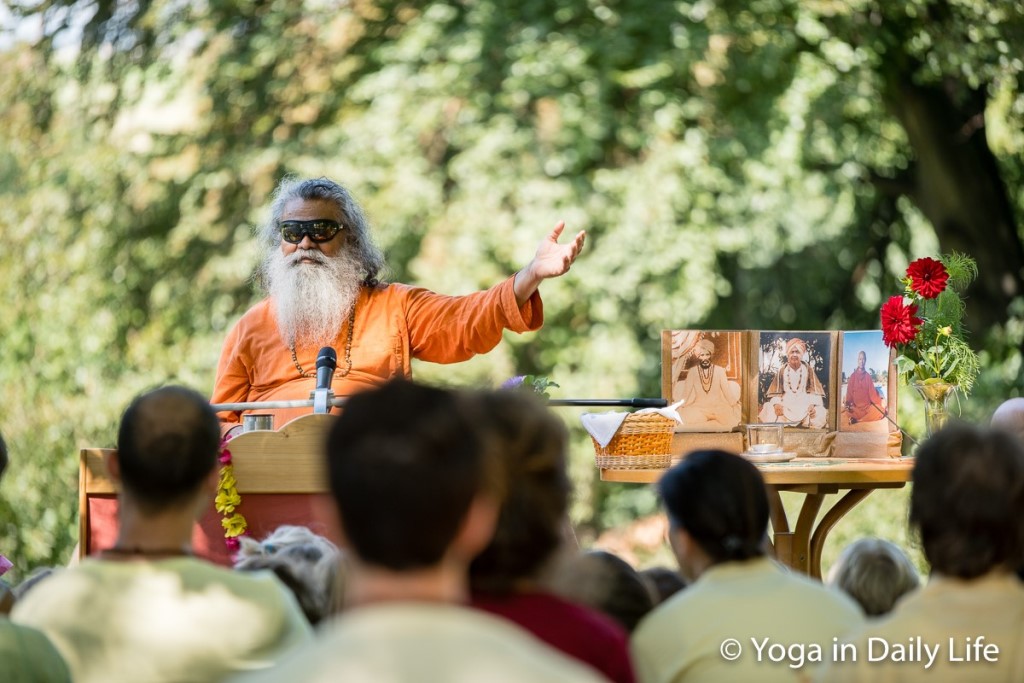 The festivities began under the shade of ancient trees in the Strilky Ashram Park, with hundreds of bhaktas gathering on this warm sunny morning to see their Gurudev. Mahamandaleshwar Swami Vivekpuri welcomed all and invited the assembled sannyasins to give Vishwaguruji the traditional gifts of a flower mala (garland) and orange chadar (shawl). 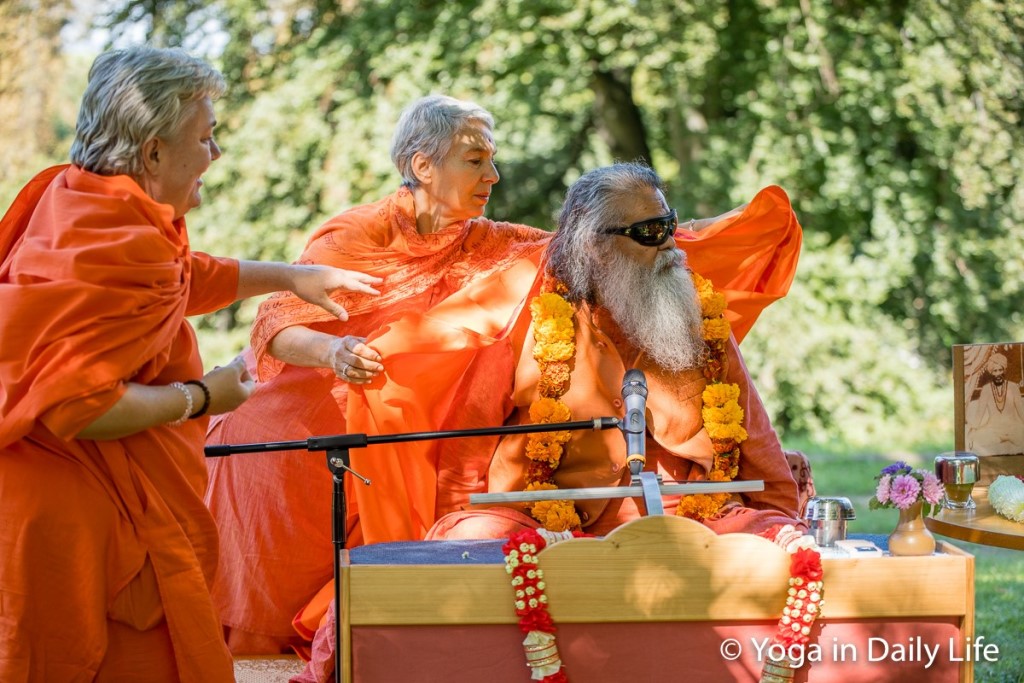 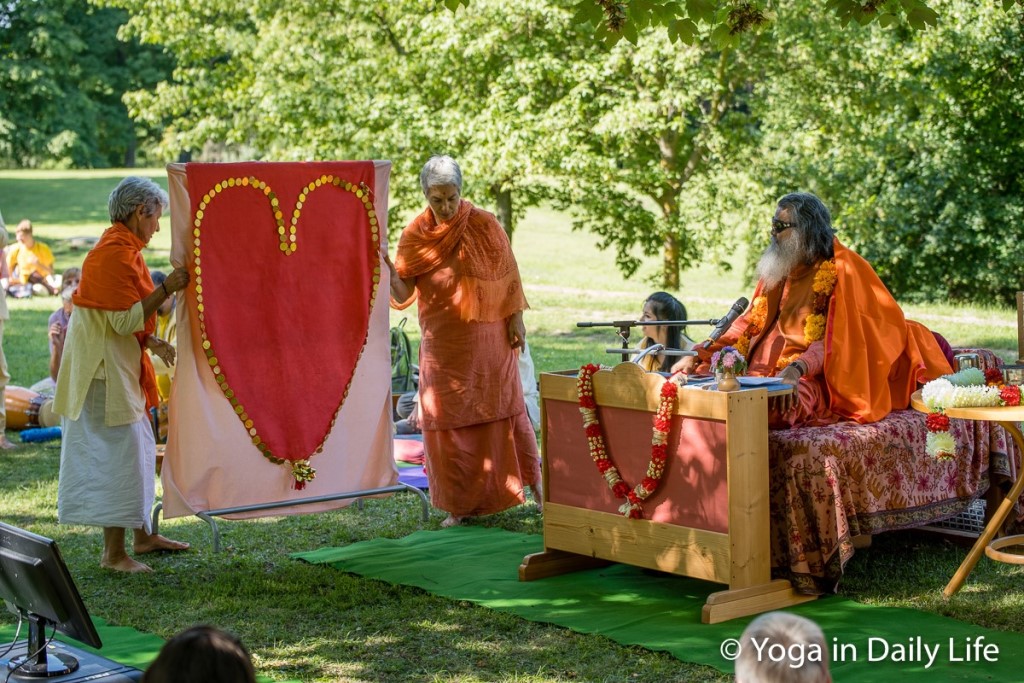 A program of performances had been planned and began with Sadhvi Parvati and a group of devotees reciting in full the Sanskrit language Yoga Sutras of Rishi Patanjali, the ages-old instructional text of the theory and practice of Yoga. 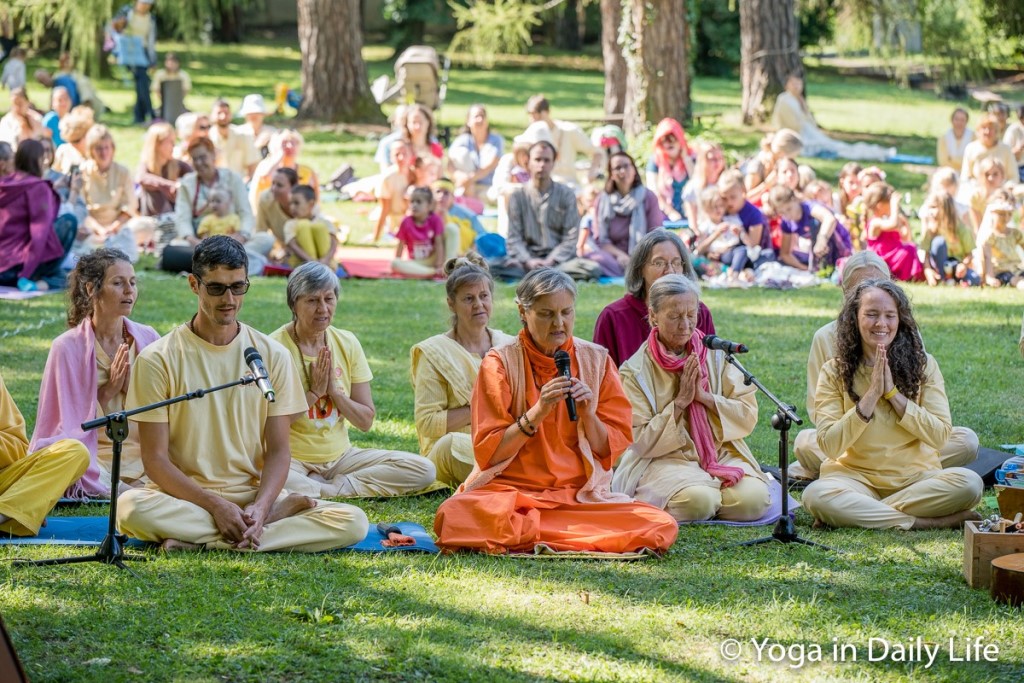 This was followed by a play by the children's yoga group. They enacted a story about Mother Earth showing her love for all plants, creatures and humans, but being threatened by the darkness of ignorance, which is so evident in this current time of Kali Yuga (literally the 'Dark Age'). The children showed that through devotion and discipline, with the guiding light of the Guru, symbolised by the sun, the people of Earth were able to overcome the darkness and once again live in harmony together, upholding principles of love, kindness and protection of all living beings.

This was followed by a demonstration display of the Bari Khatu Pranam practice from Yoga in Daily Life, from children of all ages, accompanied by the bhajan band singing, Tu Mana Indriyo Ka Swami Nija Atama Antaryami – be the Master of your senses as the Self that you are within.

Bhaktas from countries all over the world then formed a long line of devotion, in order to take their turn in receiving darshan (glance of the Guru) from Vishwaguruji and greeting him with personal gifts and offerings of love, thanks and wishes for his good health and long life. 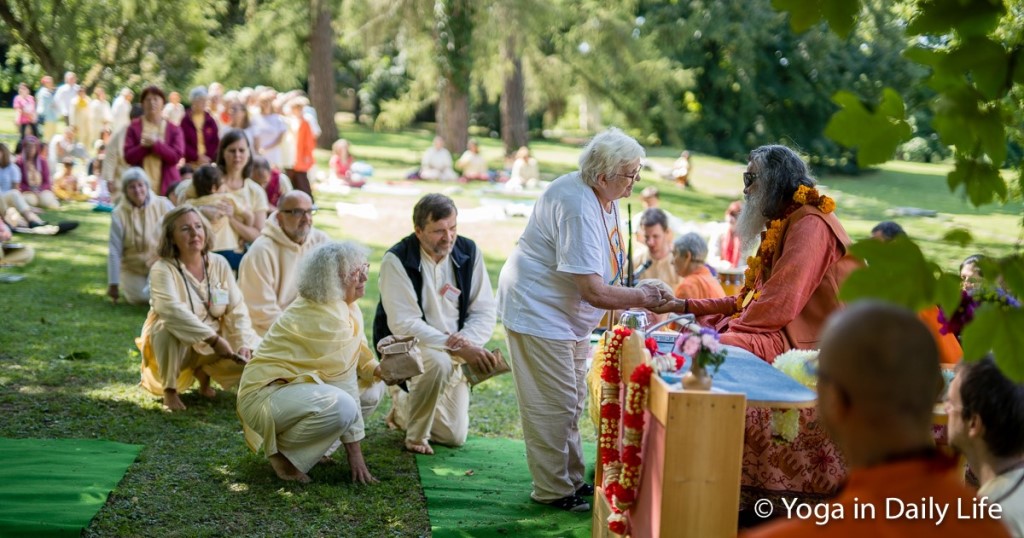 Once the darshan was complete, the children were once again invited to the front to begin their Rakshabandhan ceremony, tying a sacred thread, rakhi, around the wrists of their spiritual brothers and sisters. They also had the chance to tie a rakhi on the wrist of Vishwaguruji and receive his blessings for good health, good studies and harmony in the family for the year ahead. 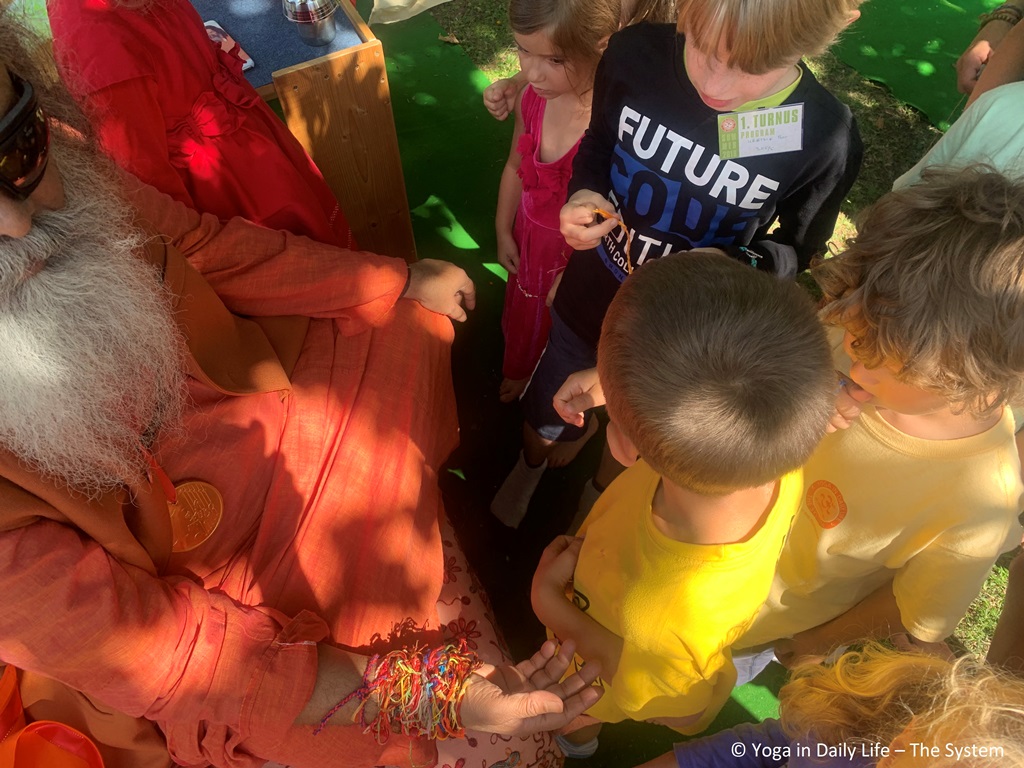