After his visit to Georgia, Vishwaguruji travelled to Ukraine, another beautiful eastern European country where Yoga in Daily Life has been active for many years now. 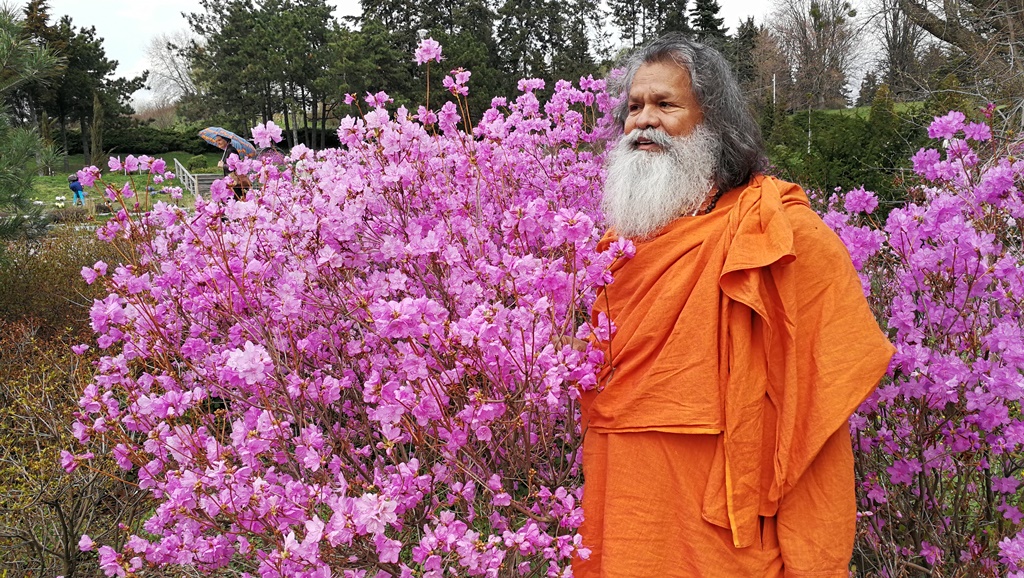 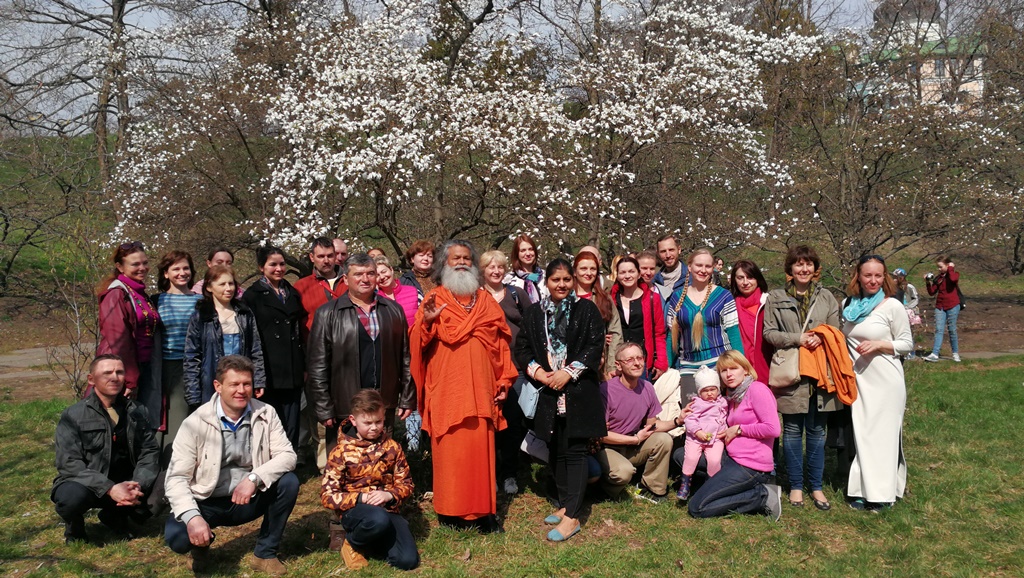 On 5 April 2017, in the Botanic Garden of Kiev, His Holiness planted a Peace Tree on behalf of the Sri Swami Madhavananda World Peace Council. Vishwaguriji expressed his wish for the Ukraine society to live in peace and harmony with nature and said that the tree was planted as a symbol of protecting the environment and maintaining peace. He gave bhaktas (devotees) the duty to visit the tree several times a year and to help to maintain the Botanic Garden. 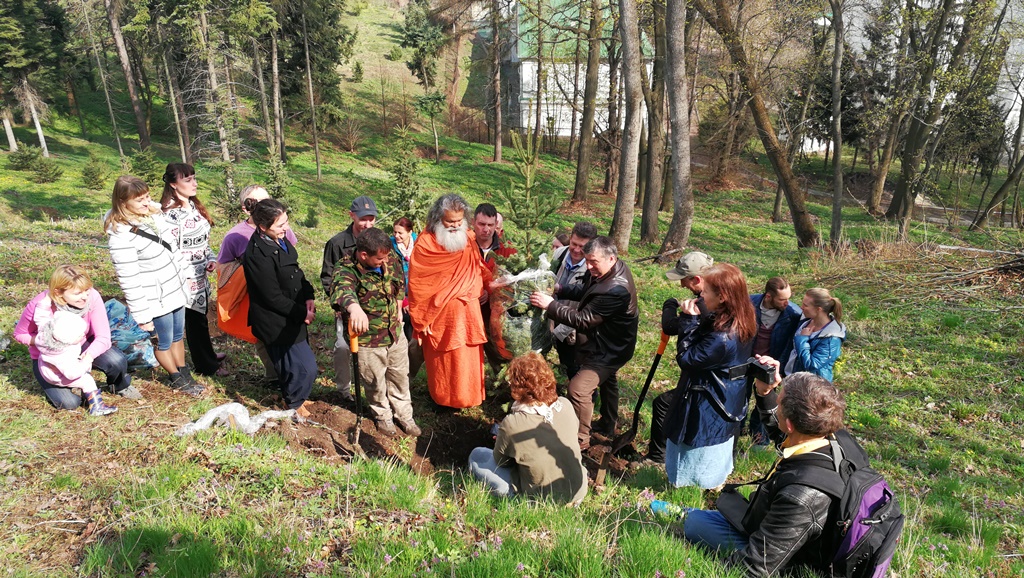 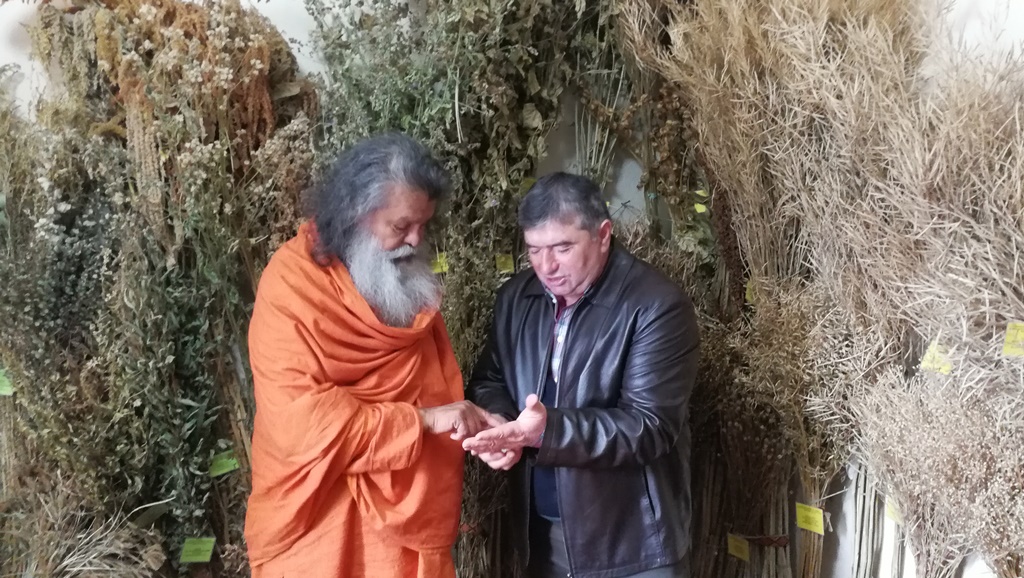 When a tree is planted it is more than just a plant - it becomes a whole world for creatures such as birds and insects, squirrels and mice.

The Kiev Botanic Garden has an academic research facility for studying tropical plants, including those that are native to India. Visitors were introduced to the local initiative to Save the Birds, as well as a project establishing a gene bank for saving heritage seeds. His Holiness gave a lecture in the main auditorium situated in the gardens, and said that pollution is one of the greatest enemies to nature - both in the air and also within the soil and plants.

After this beautiful visit and lecture, His Holiness met with the Ambassador of India to Ukraine, H.E. Manoj Kumar Bharti. They had vivid discussions about the treasures of Indian philosophy and culture, agreeing that it is very important to inspire people worldwide by spreading the principle: vasudeva kutumbakam – 'the whole world is my family'.

In the evening, His Excellency attended Vishwaguruji's public program at the Inveria Center in the heart of Kiev, and was invited to address the audience. 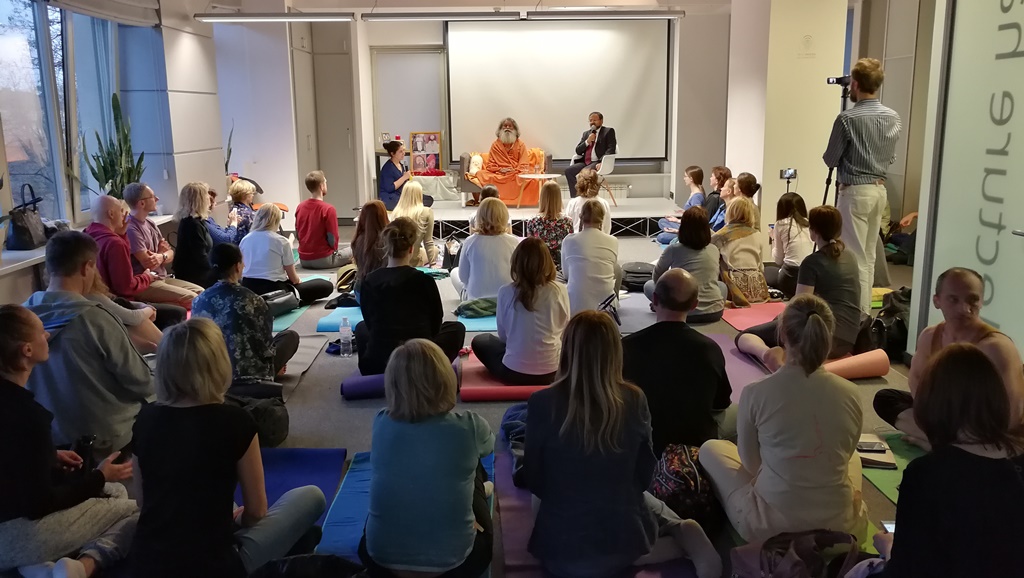 Vishwaguriji then began his lecture with chanting the mantras: AUM and omkar bindu samyuktam. He emphasized the importance of respect for India, which has given its name to a great ocean, and is known as 'mother', as in 'Mother India'.

In explaining the essence of Yoga, His Holiness introduced the topic of Creation, where the unfoldment of the universe started with multiplication of the one Brahman: eko ham bahushyami - 'I am one and now I will multiply'. Then the resonance (sound) appeared and created space and light. Liberation from the cycle of existence though many lifetimes (chorasi ka chakra) is possible through selfless action, as described in the Bhagavad Gita by Sri Krishna - yoga agni karma dagdani.

The public lecture finished with a demonstration of Khatu Pranam, a sequence of asanas from the Yoga in Daily Life System, that energizes the whole body.

On Thursday 6 April, Vishwaguruji was invited to give a lecture on 'Spirituality in Modern India' to the students of the National University Kyiv-Mohyla Academy. 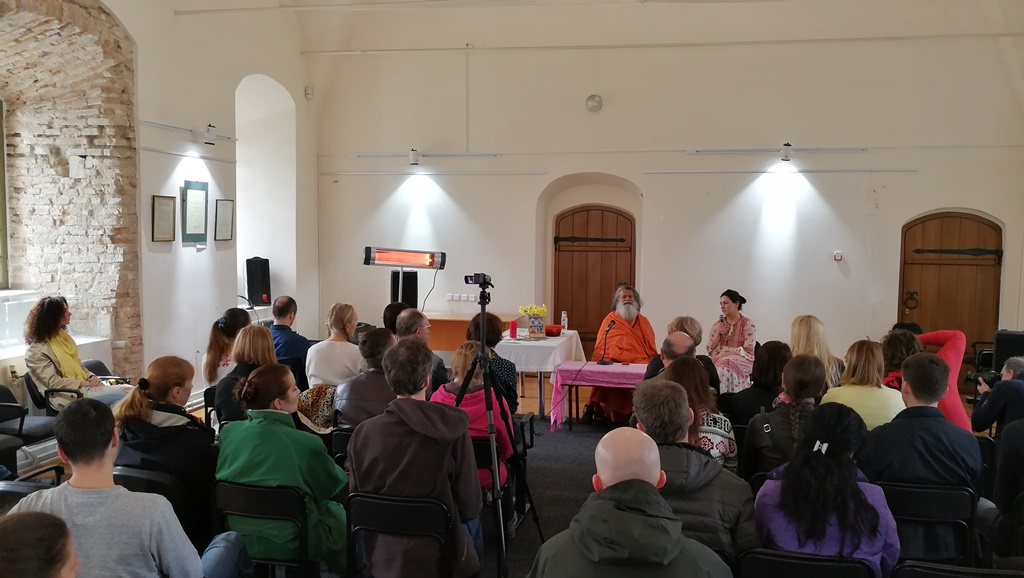 After his satsangs and lectures in Kiev and meeting Ambassador of India to Ukraine, His Holiness Vishwaguriji Maheshwarananda paid a visit to the beautiful new Ashram in Cherkasy. 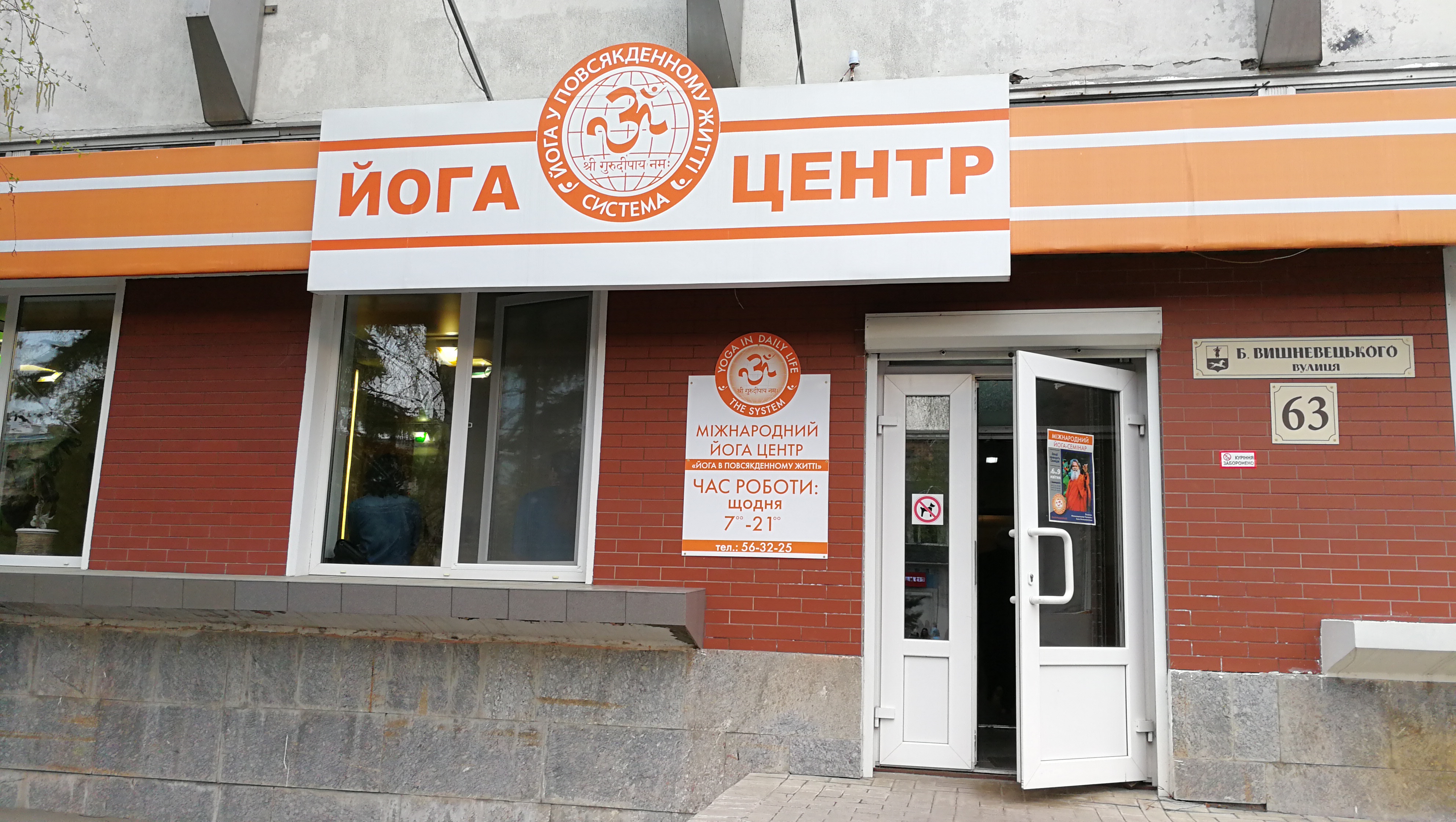 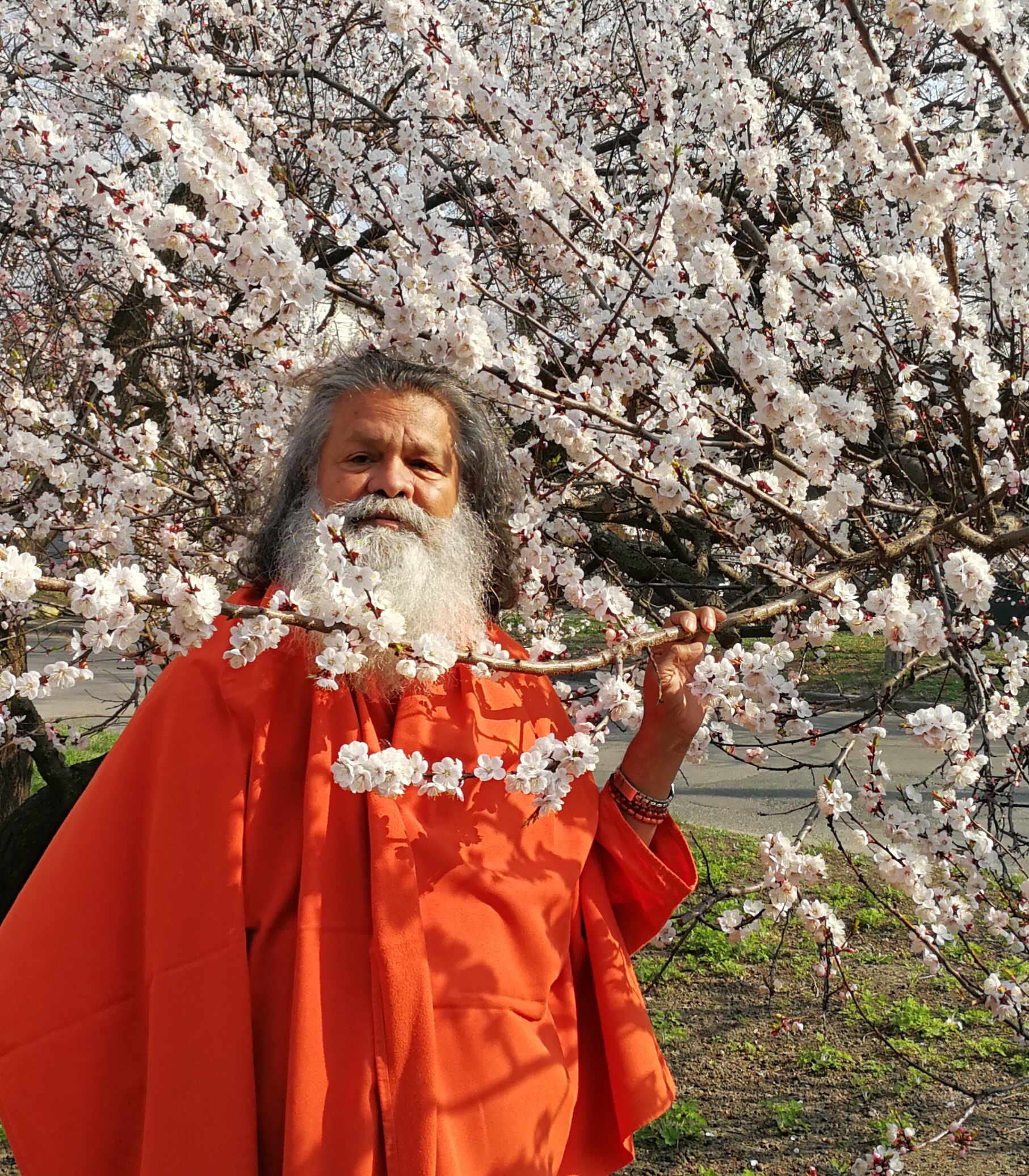 In the welcoming satsang, His Holiness acknowledged the richness of the nature in Cherkasy and whole of Ukraine, which is called the 'bread basket' of Europe. He went on to talk about the five elements (space, air, fire, water, earth), which are each holy aspects of life. 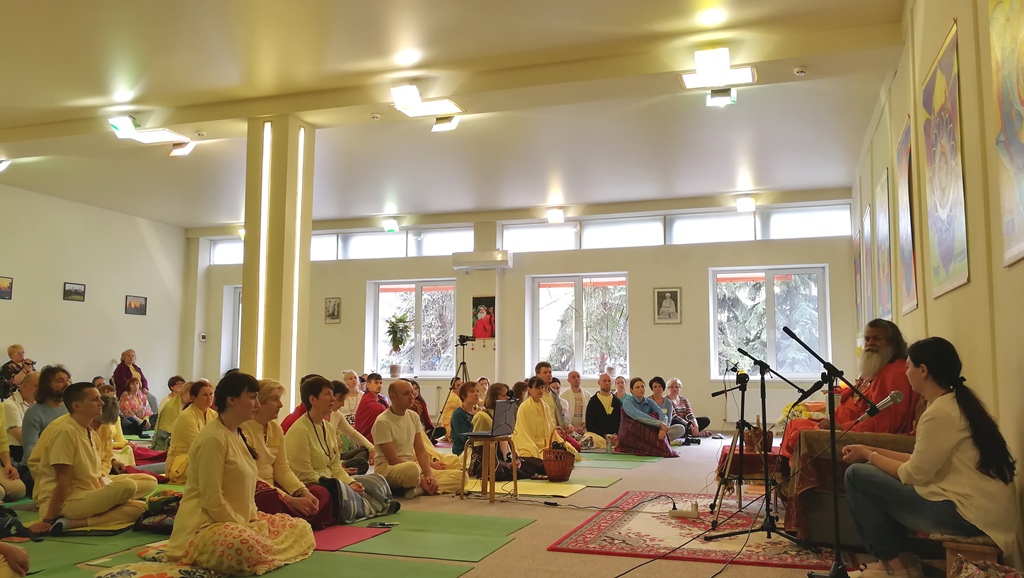 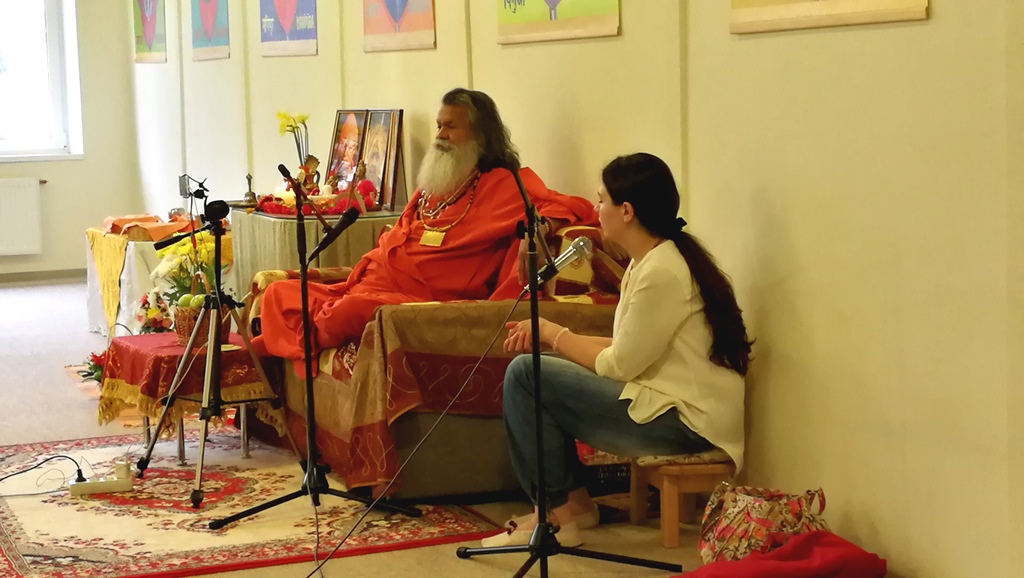 On Friday 7 April, Vishwaguriji was invited to Cherkasy Rosmedia TV for an interview with a journalist where the audience could ask questions as well. His Holiness touched many topics, including how yoga can help with gaining and maintaining good health, and how it can be used as a remedy against depression. 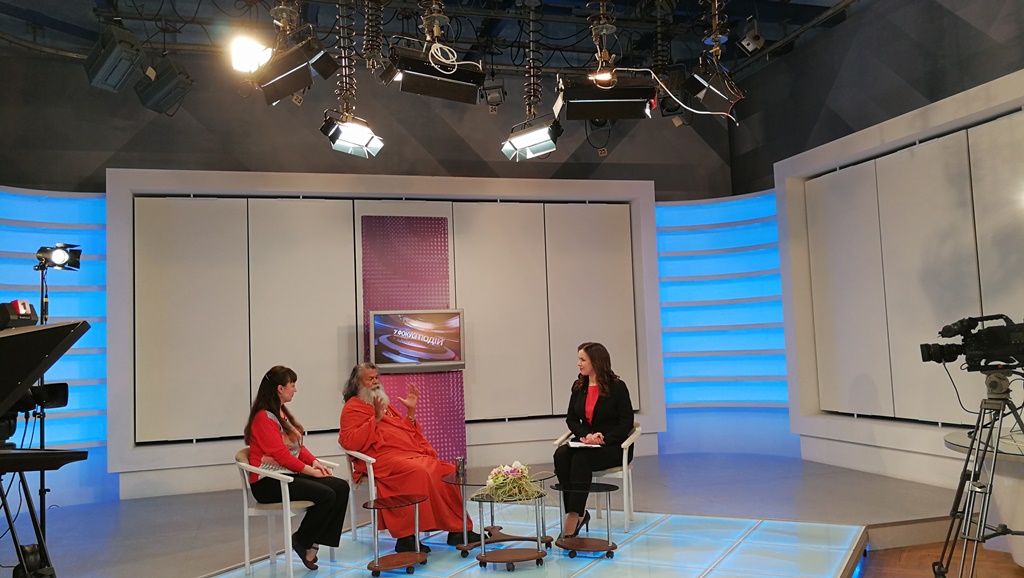 "The solution for those affected by depression is: mantra, practice of pranayama and asanas, healthy food, and love and understanding from family members."

He spoke particularly about peace - both personal inner peace as well as world peace. There were questions from the audience about religion and spirituality, and about the sort of family problems that are part of everyday life for people all over the world.

The last days in Cherkasy were filled with the beautiful topic of Meditation in Vishwaguriji's lectures. His Holiness explained that meditation cannot be done while intellectually repeating, "I will meditate"; and it is not necessary to 'learn' meditation, just as we need not to learn how to sleep. Meditation appears when our approach is pure and the circumstances are proper. A comfortable sitting posture, a calm environment and pure sattvic nourishment are essential. 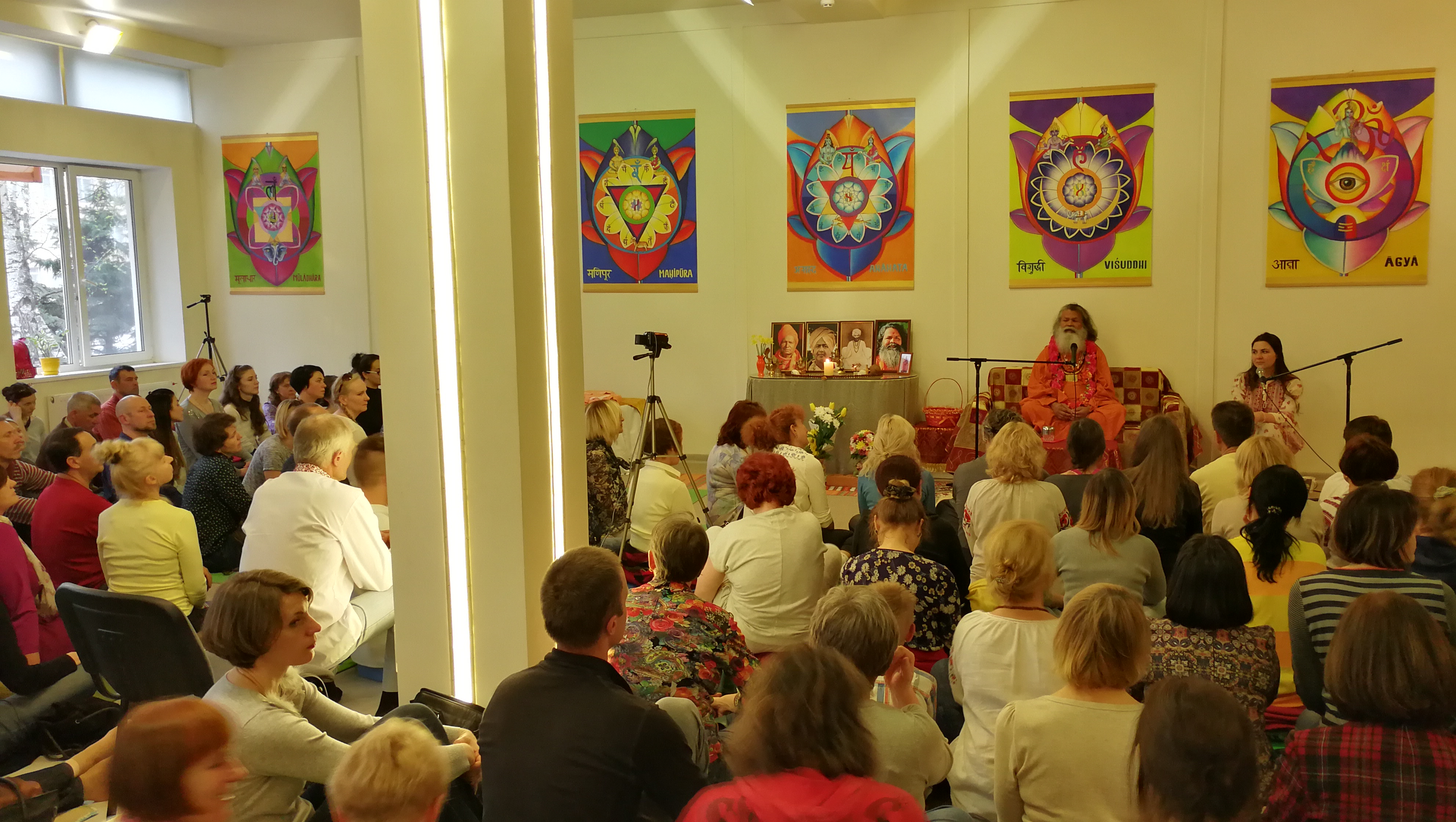 Techniques of meditation can be: passive, when you withdraw your senses and dive into your inner space; and active, while doing karma yoga (selfless service to others). Vishwaguriji talked about the states of consciousness - awakened, dream state, and deep sleep - we move between them like a pendulum throughout our whole life.

On Sunday 9 April, the last day of Vishwaguruji's program in Cherkasy, he returned with the group to visit the park where he planted a World Peace Tree four years ago.

Enriched with his words of wisdom and his blessing, the bhaktas from Ukraine bid farewell to Vishwaguruji and asked him to grant them his darshan again soon.