Following an invitation of the Yoga association of Slovenia, H.Holiness Vishwaguru Mahamandaleshwar Paramhans Swami Maheshwarananda Puriji, the Ambassador of Peace, Professor of Yoga and the autor of Yoga in daily life System visited Slovenia from 2nd to 9th May 2008 on the occasion of 20 years of organized practice according to the system Yoga in daily life.

The Ambassador  of peace started his visit of Slovenia in Novo mesto, where he held a three-day  international week-end seminar, attended by over 1000 participants from  Slovenia, Croatia, Serbia, Austria, Hungary, Germany, Czech republic and  Slovakia. He continued his tour of Slovenia with a series of public lectures,  held in Maribor, Ljubljana, where the official celebration on the occasion of  20th anniversary of organized practicing of Yoga in daily life took place, and  in Portorož. This jubilee is marked with the initiative of His Holiness Swamiji  for a blood donation campaign organized by the Union of Yoga Societies of  Slovenia and the Red Cross under the name "You too can save a life!". At the beginning of the blood donation  campaign His Holiness Swamiji met with the general secretary of Slovene Red  Cross, M. Janez Pezelj, with whom he spoke about humanitarian activities and  trends in blood donation activities in Slovenia.

H. Holiness Swamiji,  who pays a lot of attention to preserving the environment, during his visit of  Slovenia met with mayors of Novo mesto - Alojzij Muhić, Domžale - Toni Dragar,  Piran - Tomaž Gantar and Celje - Bojan Šrot, and the Minister of the environment  and spatial planning Janez Podobnik. In all his meetings preservation of the  environment was the major theme of discussions. To all his interlocutors H.  Holiness Swamiji presented projects for preserving the environment, initiated by  himself, and pointed out the importance of nourishment for preservation of the  environment. He stressed the fact that animal farms are one of the biggest  polluting factors and proposed his hosts to join the efforts in further  promoting vegetarian diet. On the occasion of His Holiness's visit mayors and  the Minister presented projects, carried out by individual municipalities in  Slovenia with the aim of preserving clean environment. After meetings at  municipalities the mayors and their guest symbolically planted Peace Trees with  an aim to maintain the world peace and preserve the environment.

During  his visit of the municipality Celje His Holiness Swamiji and the vice-mayor of  the urban municipality (UM) Celje, Stane Rozman, formally opened the Yoga centre  Celje, which is run by the Yoga in daily life society in Celje, while in the  evening hours he accepted the invitation by the mayor of UM Ljubljana, Zoran  Jankovič, to join him at the dinner organized by UM Ljubljana for the mayors of  European capitals on the occasion of their meeting, and attended the solemn  concert held in Pogaèarjev trg to celebrate the Europe Day. His Holiness ended  his visit of Slovenia on Friday at Ljubljana castle, where he attended,  following an invitation by the mayor Zoran Jankoviæ, the solemn session of the  municipality council during the celebration of the Municipality Day and  presentation of highest municipality awards. 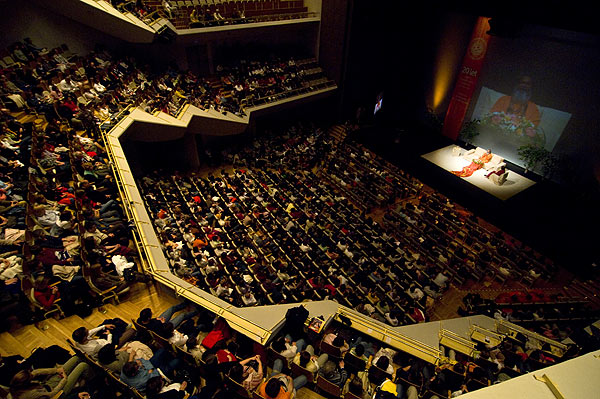 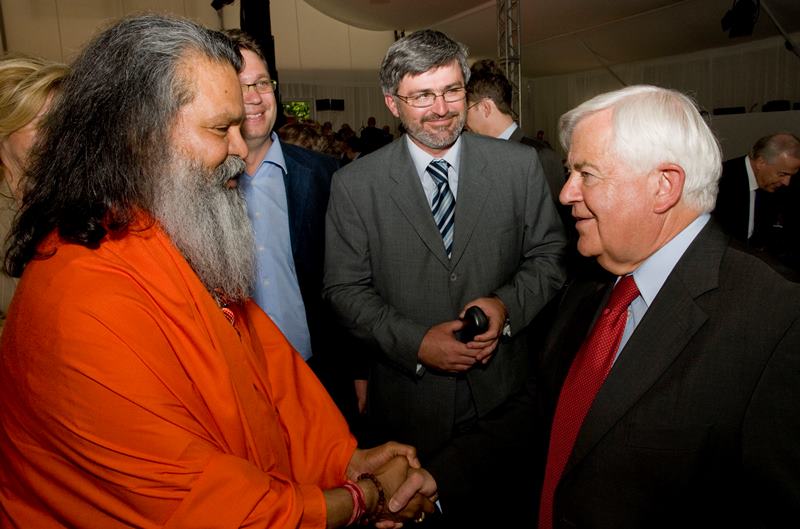 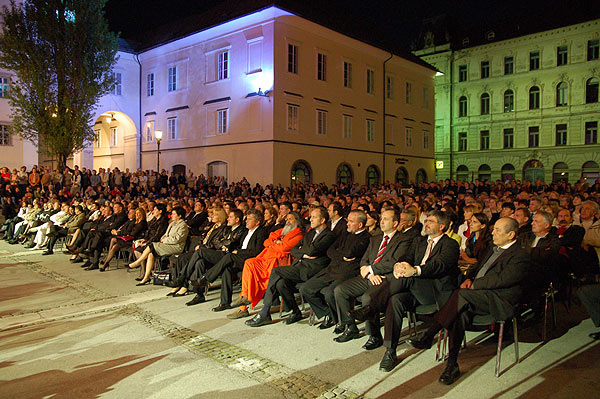 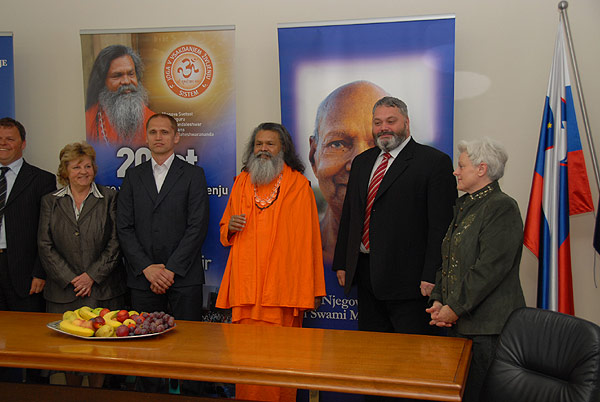 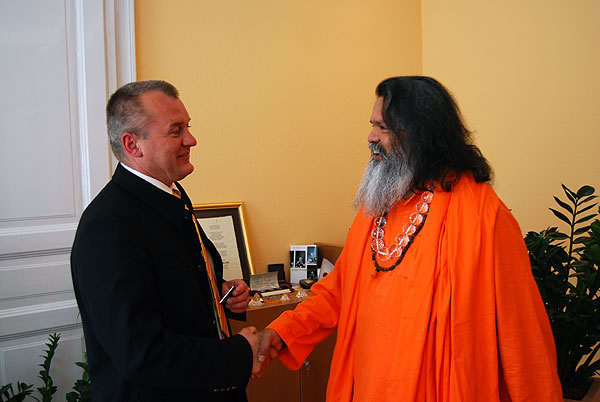 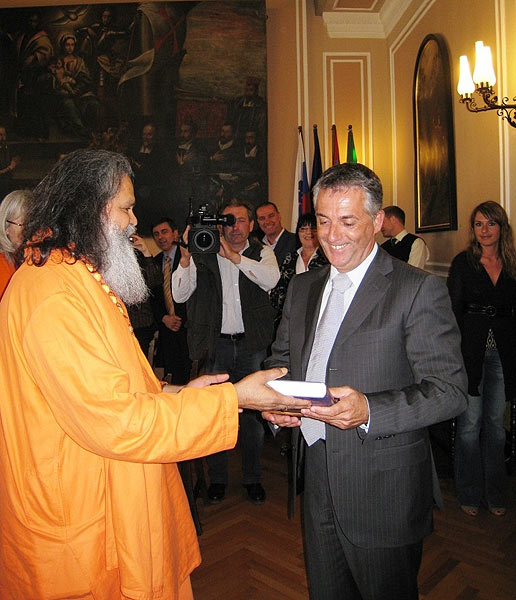 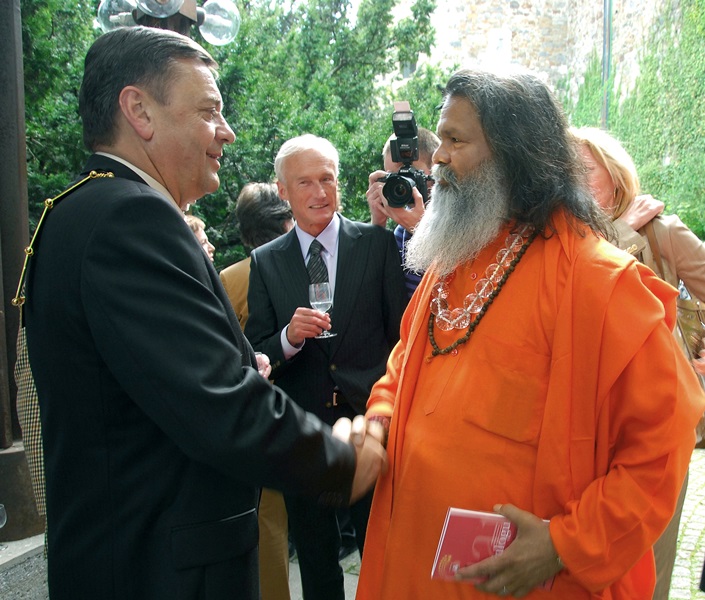 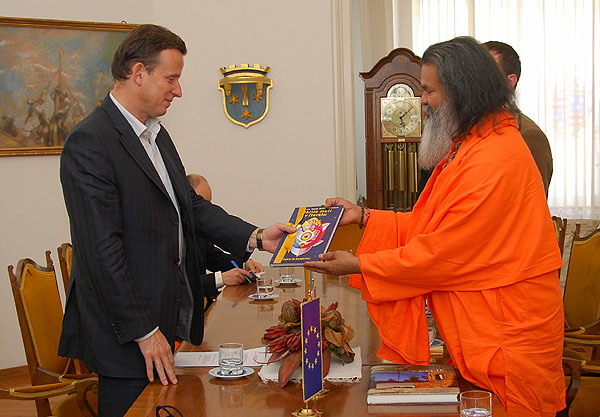 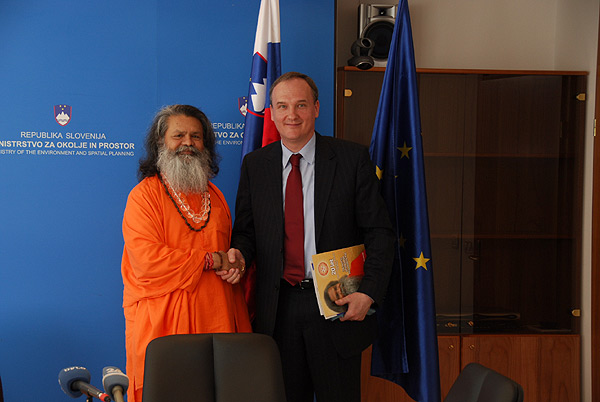 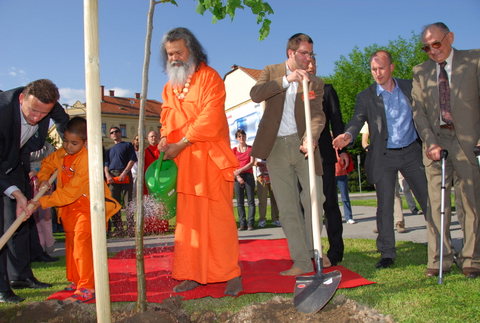 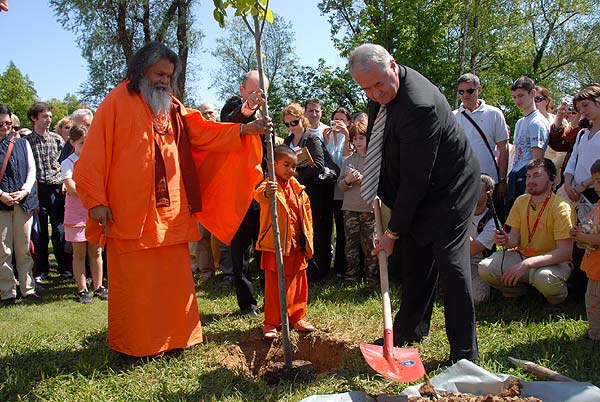