On the third day after the auspicious constellation of Amavasya, the celebration of the 70th anniversary of the mahasamadhi of Sri Devpuriji, the embodiment of Lord Shiva, was highlighted by H.H. Abunath Swami Maheshwarananda during satsang. ( His life story can be read in Lila Amrit.) 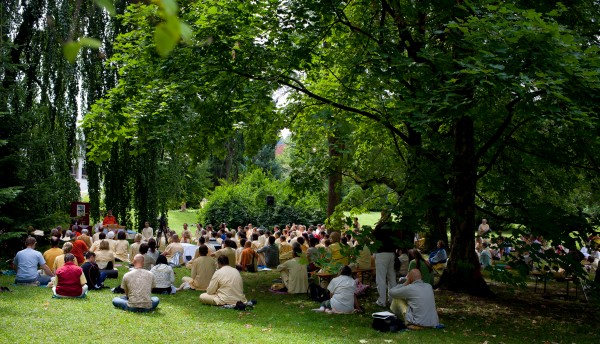 At the Mahaprabhudeep Ashram in Strilky, Czech Republic, the participants of the Summer Sadhana Camp commemorated the auspicious day of Sri Devpuriji's Mahasamadhi Anniversary and offered their tapasya (a way of asceticism) in the form of fasting.

The term samadhi is very often used in the yogic tradition. It is a special state of consciousness which comes as a result of deep meditation. There are many types of samadhi but mahasamadhi is a special one. It is the final samadhi, when the atma of a person leaves the body and unites with the Absolute. That one needs not to return to the cycle of life and death. Only great saints can achieve that special state. Therefore, remembering that day has a special meaning in Indian tradition, reminding us that we too can become united with the Universal One.