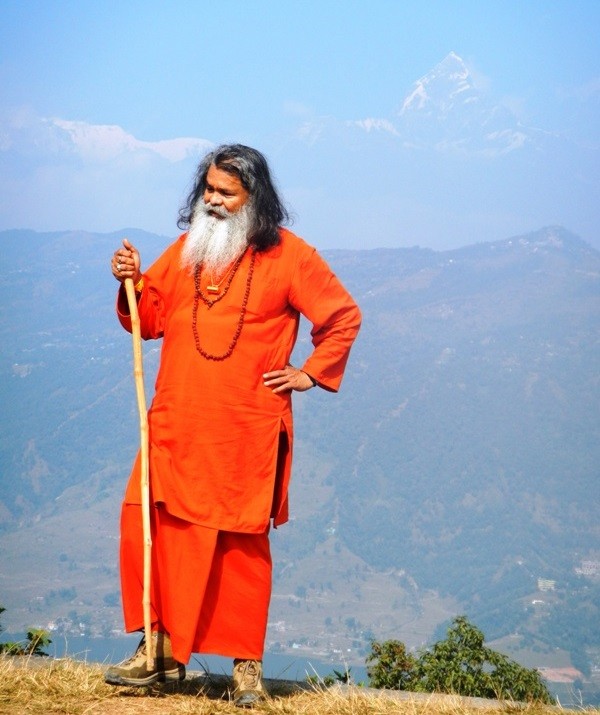 Vishwaguruji explained the meaning of the proverb Dharmo Rakshati Rakshitah. If we protect Dharma, Dharma will protect us.

He illustrated with a story about a king in the great epic, Mahabharata. Even during the times of kings, things weren’t easy, but people were more spiritual than they are now in modern times. In ancient times, prior to taking some actions in life, people went to consult with the king, a rishi (wise sage) or guru, priest, mother, or an elder, in order to make the right decisions.

Vishwaguruji shared the example of a guru. The guru has a 'Dharma Danda’ (a danda is a walking stick) and the story in Mahabharata was about a rishi guru who hits the king’s head with his danda three times and says "Dharmo Rakshati, Dharmo Rakshati, Dharmo Rakshati" meaning "protect, protect, protect the dharma." The King's crown is like the Guru's danda, it has the same dharma. The crown wasn’t given to the King to indulge in gold and to display the beauty of it on his head, but it was given to the King as a reminder to protect all.

Our body, our prana, our mind, knowledge etc. all carry their own dharma and we need to understand that and take care. The Parampara (spiritual lineage of the masters) has given the task to the Gurudev (master) to protect all living beings.

There is a danda in Christianity too – the shepherd's crook or staff. It is a symbol for Jesus, as the 'Good Shepherd', used to care for his 'flock' of disciples. And so the tradition of the ‘holy danda’ and shepherd was also demonstrated during those times in that par of the world.

During the Mahamandaleshwar initiation in the Sanatan Dharma tradition (now known as Hinduism), one receives a tilak, a shawl, and a danda, and that is called the 'Dharma danda'.

Dogs take care of the sheep and protect too. That’s the dharma of a sheepdog. The master goes home, and the dogs protect, no one can get close to them. The dogs are humble and follow the instructions of their master.

Family is also a duty; we ought to learn and follow the dharma of family life.

While practicing Yoga postures, each body part and the breath carry their own unique dharma during the movements.

Ahimsa Paramo Dharma literally means non-violence is the highest moral virtue. Therefore, do not kill any living being, protect, protect, protect. Follow the dharma, and dharma will protect the protector of dharma – Dharmo Rakshati Rakshitah.